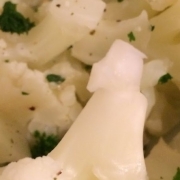 Dinner is an important part of our day; this is when body starts to slow down and in a transition to rest. Some say dinner is should be the biggest meal of the day, for most of the time, it is because we have more time to dine with friends or family and to enjoy ourselves. When to eat and what to eat is crucially important.

Having a light dinner once in a week gives break from all the heavier meals, rebalancing your digestive system so it can proper rest already when you sleep. Last night I experienced with lemon, which gives a citrus taste that opens the appetite. Lemon goes great with some salt, and some fresh herbs. In my opinion, it especially goes well with parsley or honey.
A warm salad withcauliflowers, sprinkle with shredded parsley leaves and some lemon and salt. Absolutely delicious. So refreshing, delicious and rejuvenating.
Here’s what I did for a serving of 2
A whole cauliflower….. cut and boil in water for 5 mins, let it sit for another 5
1/3 a lemon juice….. add it in the cauliflower, mix
a handful of parsley….. slice thinly and mix with the bowl
some salt and pepper to taste
Wala! You have a warm salad!
On the side, I have Ikea salmon as my main dish. Oh, Ikea salmon is a treasure I found couple years ago living in San Diego when I could literally walked to Ikea from my place. Their salmon in the food section comes in a pack of four, so fresh, nothing fishy, simply delicious. Heat up the oven to 170 – 180 degree, then places the salmon in for about 15-20 mins, sprinkle with some lemon juice. I don’t even add salt because the salmon itself taste that good. Quick and easy, you have great nutrition without a lot of work.
Xoxo,
Paye
https://payetina.yoga/wp-content/uploads/2019/09/lemony-kind-of-light-dinner-img.jpg 444 900 paye_admin https://payetina.yoga/wp-content/uploads/2019/09/logov2.0.jpg paye_admin2014-10-18 10:01:122019-09-21 10:06:00LEMON(Y) KIND OF LIGHT DINNER

A few days ago I attended a workshop called „Typically Swiss“, designed for foreigners to understand unspoken Swiss culture or at least to come to an understanding of why Switzerland is the way it is.

Having lived here for awhile now, I have picked up a sense Swiss culture. The country is known for its precision, punctuality and perfectionism. This itself does give off a sense disliking variety, difficult to negotiate with and inflexible, which are true in some sense. However, that there are several factors that must be considered.

First, if you look at the map directly from North to South, Switzerland sits in Central Europe with no connection to the outside world. You see mountains, mountains and more mountains, that means, people take life pretty serious. If the farmers do not have enough to stock up for the winter, they will not survive. Secondly, it is also the hot spot for big industries such as pharmaceutical, banking, logistics, graphic design, watch and jewelry. Therefore doing things the „right way“ would add tremendous value to the people and the country itself. Third, it is perhaps the most, if not, one of the richest country in the world. Switzerland is self-reliant country. We see kids walking to school by themselves all the time, without parents escorting or transporting by the vehicles (I have learned children must walk to school). So this itself already, demonstrates the safety of the country. Although such a controlled, neutral, prideful and transparent country may seemed almost distant, the same lady who yells at you to not drive your bicycle on the sidewalk would escort an old lady who needs help crossing the road. These rules must be followed in order to maintain such a controlled society. Being mindful of what you do and doing it the right way definitely is the their key to longevity and health.

The country is made up of 26 cantons, and it is a federation by choice. The right to private life is so embedded in the culture that almost suffocate me in the beginning. Do people have no social life here? Well, it isn’t that. They value very much to take time off and not being overworked. Thus the stereotype of „everything closes too early.“ In general, Swiss people have a morning break at 9AM (already?) and another one at 4PM. Corporation buildings are built so that employees can take breaks. If your colleague see you eating next to a pile of paperwork or in front of the computer at lunch break, they’ll be worried for you. They think you’ll get sick and it will influence the company.

Swiss also has a very peculiar way of logic. I don’t mean that it is bad, I just mean I am always surprise how it self-organizes. Participants in this workshop have complained about elder generation people tend to like to cut the line, especially in Basel area. If you confront them, they won’t think it is a big deal, they’ll just let you go first. They would think it’s strange if you get upset. Yet, I have been in grocery stores where I only have one thing, and the people in front would let me go first, but it isn’t that they have a whole cart, they may have 8 items. At the same time, people do not mind waiting in lines. So I guess their sense of queuing more or less equal out the right amount of time waiting in line.

1) We have always done it this way.

2) We have never done it that way.

3) No exceptions. Default answer is most likely to be NO.
– When negotiating, seek to understand, prove what you are proposing adds value. And never raise your voice. Oh this I have encountered many times. I ask for something in services or hospitality, the answer has always been „No.“ „No, sorry we cannot do that for you.“ „No, sorry, that is not possible.“ „I know this is not convenient, but at this point, there is nothing can be done.“ Yes, at some point I wonder how customer service works? Do they put employees or customer first?

The population of the country is 8.1 million with 23% foreigners. 40% of the Swiss marriage are intercultural marriage.

Understatement and modesty are big plusses here. So please, DON’T SHOW OFF.

Having lived in many places, what surprises me living in Switzerland is that for the first time I do not feel like a foreigner here. Yes, perhaps a bit of language issues that can cause some misunderstanding. But never have I felt being treated differently because I am not Swiss/European/Swiss-speaking. The transparency and their neutrality in politics (and of course, low tax rate) after all, must be what attracts foreigners, political asylum or expats living in Switzerland.